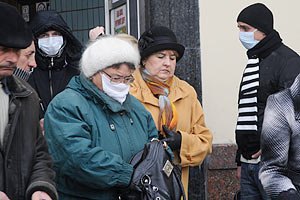 Since the end of the autumn, 72 people in Ukraine have died of flu, Deputy Health Minister Ihor Perehynets has said.

"As regards the lethal cases, there were 72 of them, judging by the information we had received from the regions by yesterday," he said at a news conference.

He said that all of them were adults who were too late to request medical assistance.

The so-called swine flu, A(H1N1), has been raging in Ukraine since December.