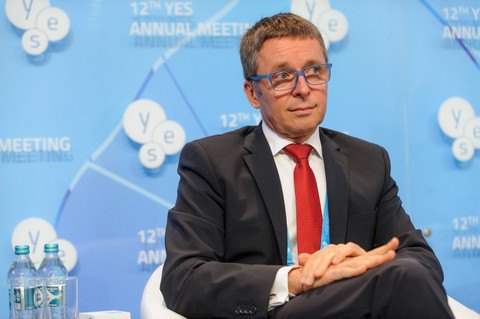 Parliament speaker Volodymyr Hroysman, who is increasingly seen as the main candidate for the post of prime minister, has said he has submitted proposals on the composition of his cabinet.

"If the coalition supports my candidacy and the proposals I have submitted and if we discuss specific candidates to specific positions in the ministries today, this government will be effective," Hroysman told a meeting of the agenda-setting council of the heads of parliament factions, committees and groups on Monday, 11 April.

Among other things he said that former Slovak Finance Minister Ivan Miklos will work with his government.

However, Hroysman did not elaborate whether Miklos is going to do so as finance minister.

"Regarding Ivan Miklos, whom I deeply respect, he is a professional reformer. We will cooperate, about the form of that cooperation, we will inform you together with Ivan," Hroysman told reporters in parliament.

"As for [the current head of the presidential administration] Borys [Lozhkin], as far as I know, he has not given his final consent as yet," he said.

Ivan Miklos earlier gave his preliminary consent to enter the Ukrainian government provided he retains citizenship of Slovakia. To meet this requirement, a bill allowing foreigners to work in the Cabinet of Ministers was registered with parliament.

In May 2015 he, along with the head of the investment company Dragon Capital, Tomasz Fiala, and musician Svyatoslav Vakarchuk, registered the Centre for Economic Strategy think-tank.