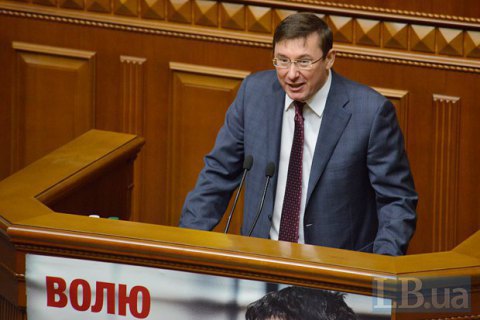 The leader of the Petro Poroshenko Bloc faction in the Ukrainian parliament, Yuriy Lutsenko, has stated preparedness to take the top post at the Prosecutor-General's Office (PGO). He was speaking to the press on the sidelines of parliament.

"I recently discussed my vision of this issue with the president. It is a known fact that the current legislation does not allow me to be a candidate for prosecutor-general. I was asked then if I was ready if the law is changed? I said I did not want to but I would. I know exactly what kind of work it is bound to be and that it would not make anyone happy. If the president officially makes the proposal and proper changes are made to the legislation, I am willing to consider such a proposal," Lutsenko said.

Lutsenko said he believed that only a person from the outside the prosecution system must become the chief prosecutor.

"I do not believe that internal reshuffles can resuscitate this system," he said, adding that, in his opinion, the nation's prosecution system quickly regains the "Yanukovych format" and just cannot be cleaned "from the inside."

The PGO has reportedly advised President Poroshenko and parliament speaker Volodymyr Hroysman against appointing a person who has no experience in the prosecution system as chief prosecutor.