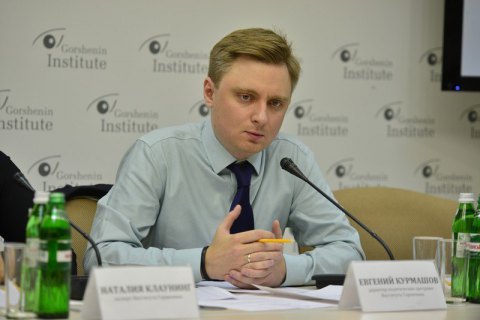 The victory of Bernie Sanders on the Democratic primaries in several states in a row does not pose much of a threat to Hillary Clinton. The director of political programs of the Institute Yevhen Kurmashov said this the round table "The presidential campaign in the United States: Trends, Forecasts and impact on US-Ukrainian relations" at the Gorshenin Institute.

"Hillary has lost a lot of states, and the electoral wave of Sanders, which he has made over the past two weeks, halted the electoral wave that Hillary Clinton had when she won about seven states in a row. By any means, the Clinton campaign feels a certain level of nervousness," he said, .

Kurmashov stressed that Clinton has a pretty large anti-rating, even among the supporters of the Democratic Party, and the task of Sanders was to steal those voices for himself. "Today, we see Bernie Sanders showing a very good performance leading quite a populistic leftist campaign. The campaign of Bernie Sanders is essentially a flash mob, both electorally and financially. Because at some point he managed to garner a fairly large number of voters into and adventurous quest named "Overthrow Hillary Clinton." This is the essence of the election campaign of Sanders," the expert said.

"However, there is no need to deceive ourselves by these electoral victories of Sanders. The party elite of the Democrats have a huge set of tools by which they can neutralize any result of any candidate who is challenging Hillary Clinton, about which today there is consensus in the party. The elites have already agreed that she satisfies all," added Kurmashov.

He cited the example of Wisconsin, where Sanders won with a slight lead. "It seemed to be a victory, with lot of words and victorious pictures, but in terms of of delegates, Hillary Clinton did not lost a lot, specifically in Wisconsin. And the picture is the same in almost all states. Bernie Sanders wins, gets his share of delegates, but then a large number of superdelegates, who are the party elite, almost entirely still side with Hillary Clinton," said the expert.

In Kurmashov's words, the only important point for Clinton now is to get ahead of Sanders on the results of primaries without these superdelegates.

The expert also noted that the most critical point of Clinton's campaign will be on April 19, when the Democratic primaries are held in New York. "Of course, the news from New York that Clinton has received from her pollsters, are more than pleasing. New York is the stronghold for the Democrats, a must-win for any Democratic candidate. Besides, Hillary Clinton was for years the senator from this state, and her loss to Bernie Sanders could have really destabilize her campaign and send her into a steep dive from which it will be very difficult for her to get out. Given that one of the objectives of Sanders' campaign today is undermining the position of the super-delegates, who have the right to change their stance before the Congress, losing New York would be the greatest gift that Clinton may give to Sanders' headquarters Even if it will be the victory of a few tenths of a percent," said the director of political programs of the Horshenin Institute.

Still, Kurmashov is confident that Clinton stands every chance of winning the remaining key states like New York, Pennsylvania, California and New Jersey.