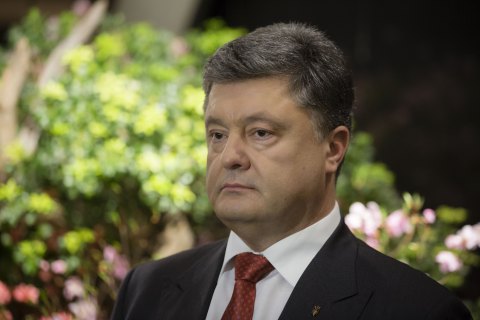 President Petro Poroshenko is convinced that the referendum in the Netherlands will not be an obstacle to Ukraine's movement towards the European Union.

"I should like to remind everyone that the true target of the referendum organizers is not the Association Agreement between Ukraine and the EU. It is an attack on the unity of Europe, the attack on the European values. This was also evidenced by the debate that was launched on the eve of the referendum," the president said.

He thanked all those who supported Ukraine.

"I thank everyone who voted 'for', and that's hundreds of thousands of supporters of Ukraine. I thank all those who took part in the promotion of Ukraine in the Netherlands, and that's politicians, and volunteers, and stars of sport and culture," said Poroshenko.

He also recalled that the referendum, according to the Constitution and laws of the Netherlands, was "purely advisory in nature."

"Now, it's up for the government, the parliament and political circles of the Netherlands," said Poroshenko.

"I believe that strategically this event is not an obstacle on Ukraine's path to Europe. I should responsibly say that in spite of this, Ukraine will continue to implement the Association Agreement, ensure the creation of a deep and comprehensive free trade area with the European Union, because this the way toward modernization of the Ukrainian state and strengthening of its independence, I do emphasize: we will not deviate from the path of European integration. Ukraine, like freedom, cannot be stopped," the president stressed in conclusion.

The Netherlands is the last country in the EU that has not completed the process of ratification of Ukraine/EU association agreement.

Yesterday in the Netherlands held a referendum. Submitted to a vote the question was: "Are you for or against the law on the approval of the association agreement between the European Union and Ukraine.

On April 6, an advisory referendum on the Ukraine-EU Association Agreement was held in the Netherlands. The Dutch were to answer the question whether they support or oppose the Agreement’s ratification. It was the first referendum, held in accordance with the law passed last summer.

According to exit polls, the turnout was 32 per cent with 64 per cent having voted "against".