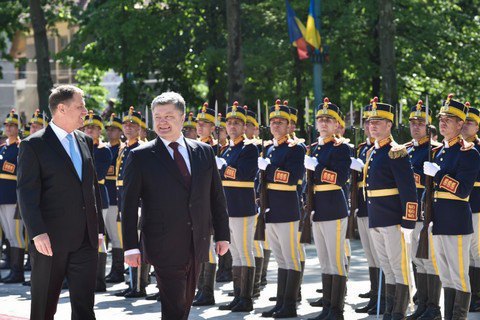 Ukraine has discussed the possibility of setting up a joint military brigade with Romania and Bulgaria, similar to the existing Ukrainian-Lithuanian-Polish brigade, President Petro Poroshenko told a joint news conference with Romanian President Klaus Iohannis in Bucharest on Thursday.

"During the Bulgarian president's visit to China and during our negotiations today, we discussed the possibility of setting up a Ukrainian-Romanian-Bulgarian brigade after the fashion of UkrLitPolBrig. We have a positive record of implementing this agreement. I am sure that such steps will improve both security and confidence in the region and elsewhere in Europe," Poroshenko said.

On January 25, an opening ceremony of LitPolUkrBrig headquarters was held in Lublin (Poland).

LitPolUkrBrig will be used to participate in operations under the auspices of the UN, NATO and the EU. The main tasks of the team will be to participate in the international efforts to promote peace, enhance regional cooperation in the military and laying the foundations for the creation on the basis of a brigade combat team of the EU.