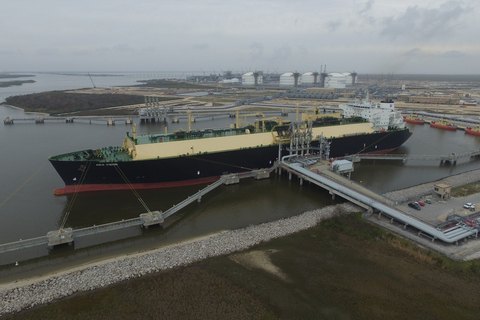 The first tanker with liquefied natural gas departed from Louisiana, USA, and is expected arrive in Portugal late April, Ukrinform reports with a reference to Wall Street Journal.

The supplier is US company Cheniere Energ, the buyer - Portuguese Galp Energia.

The American gas can seriously stir up the crowded European market for decades dominated by Russia. According to analysts, the gas from the United States could stir a price war, which, in turn, lead to lower prices for consumers.

"This is the start of a price war between the American LNG and pipeline gas," said an analyst at Société Générale, Thierry Bros.

US first began to export its gas in February, when the company Cheniere Energy sold a shipment to Brazil. Cheniere has signed long-term contracts with a number of European companies, including BG Group and the Spanish Gas Natural.

Portuguese Galp Energia also has purchased the first batch of gas to Europe from Cheniere. It is expected that Europe will be a major market for US LNG. Shale boom has completely changed the energy market in the US, and, according to forecasts, in 2017 the country will become a net exporter of gas.

In Europe, the US gas would have to compete with gas from Russia, which supplies about a third pipeline for gas on the continent.

According to experts, Russia could reduce the prices for European consumers. Earlier, Gazprom announced it will not wage a price war, but if the US LNG prices fall, the company will try to reduce their costs.

Gas from the US supplied to Europe could cost 4.3 dollars per million British thermal units (MMBtu), while Russia sells it for $ 5.8. Analysts say that Russia may reduce the price to down to 3 dollars per MMBtu.