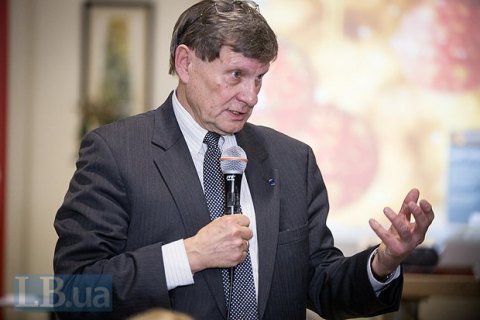 The architect of successful Polish reforms Leszek Balcerowicz became President’s Representative in the Cabinet of Ministers, according to a decree signed by Petro Poroshenko on Friday.

The establishment of the Group of Strategic Advisors on the Support for Reforms in Ukraine has been endorsed by the EU. On Thursday, Petro Poroshenko discussed this issue with Commissioner for European Neighborhood Policy and Enlargement Negotiations Johannes Hahn.

“We will not have a presidential team or prime minister’s team. We will have one team that will reform the country,” the head of state noted.

The prime minister noted: “It will be a great honor for me to work with Mr. Balcerowicz and Mr. Mikloš. I believe the Cabinet of Ministers has the same opinion. I would like to say that the majority of ministers are determined to implement reforms in the country”.

“Ukraine’s development is much better than it is pictured abroad. I have to show these achievements that are not always noticed by the West,” Leszek Balcerowicz said.

Leszek Balcerowicz told that he would, inter alia, work with western investors and politicians in order to outline real situation in Ukraine and show achievements of our country on the track of reforms.

Ivan Mikloš emphasized that Ukraine had significant unused potential. “Our goal is not to create a parallel structure, but to help Ukrainian reformers overcome problems,” he noted.