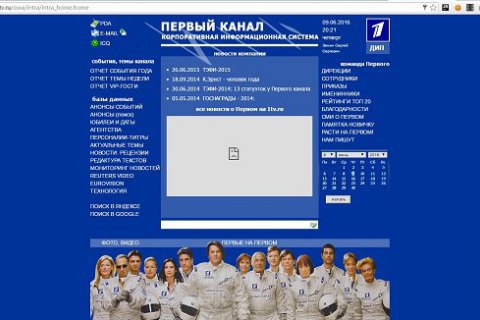 Ukrainian hackers have broken into the corporate website of the Russian Channel One TV, InformNapalm has said.

"The volunteers of the InformNapalm international community have exclusive rights to disclose the details of the hacking into the corporate portal of the state-owned Russian Channel One by the Ukrainian cyber alliance consisting of FalconsFlame, Trinity and Rukh8," it said.

According to the cyber activists, the operation to hack the links of the Russian propaganda machine was carried out within the project to force Russia to deoccupy Donbas and implement its commitments under the Minsk agreements.

They insist that the cyber attacks are aimed solely against the elements of Russian propaganda aimed at hiding the information about Russia's military crimes in Ukraine.

"Let us remind you that this operation started on 25 May, its first results were available on 5 June and, according to the representatives of the alliance, "will last until the moment the last Russian serviceman leaves the Ukrainian soil," the statement reads.

According to InformNapalm, personal data of all employees of Channel One was published online. Also, there is a capacity to hack the mail accounts and cloud storages of the employees who were particularly proactive in creating and promoting aggressive propaganda against Ukraine and its citizens.