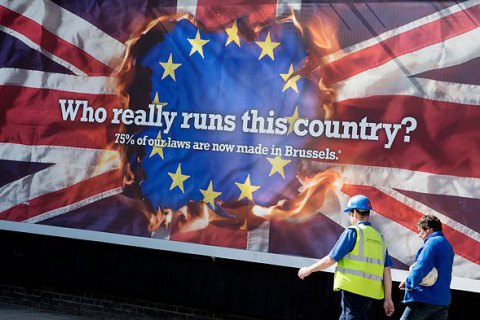 "It's sad, but 'we should do our thing.' I believe that, despite the referendum's outcome, the UK remains in a united Europe and will defend common European values," he wrote on Facebook. Poroshenko believes that the current challenge for the EU is to "find a way to the hearts of eurosceptics, so as not to give any chance to the opponents of the European integration project and their generous sponsors." In addition, the president added that he expected that the sanctions against Russia as an aggressor country would be extended.

In turn, Ukrainian Prime Minister Volodymyr Groysman wrote on Facebook that Ukraine respects the results of the UK referendum, however, he hopes that the integrity of Europe will be saved.

"Unfortunately, today is not the best day for a united Europe. I accept and respect the results of the referendum in the UK. But I believe that the unity of the European peoples will still be saved. Because it is based, first of all, on common to all of us democratic values," Groysman said. "We, Ukrainians, remain committed to these European, democratic values. We have suffered our European choice and continue to pay for it a high price, protecting not only our sovereignty but also the eastern borders of Europe. Therefore, we will continue to fight for a strong united Europe and fill the European integration processes with new energy."