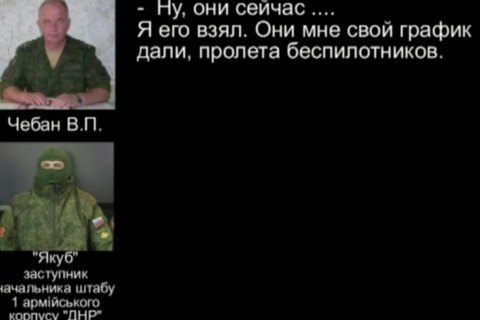 The Security Service of Ukraine (SBU) has expelled to Russia the head of the Russia office of the Joint Centre for Control and Coordination (JCCC) of Cease-fire, Col Vladimir Cheban.

The SBU said on its website that he had supplied the deputy staff commander of the so-called first army corps of the self-proclaimed Donetsk people's republic, aka Yakub, with the monthly schedules and routes of OSCE Special Monitoring Mission drones.

"Using this information, the militants could hide their firing positions and the areas where their heavy weapons and equipment are stationed from the eyes of international observers.

The SBU let Cheban know that he must leave Ukraine and will be banned from re-entering for five years. He was accompanied by SBU officers towards the border with Russia in Kharkiv Region and left the territory of Ukraine.

The special service also published what it described as the audio recording of Cheban's conversation with Yakub.

The JCCC was set up In September 2014 to see to the implementation of a cease-fire agreement. It consists of Ukrainian and Russian servicemen.

Russian servicemen, who are members of the JCCC, have a status of tourists in Ukraine. By the end of 2015, the JCCC had 74 Russian officers, 34 of them permanently based on Ukraine-controlled territories.