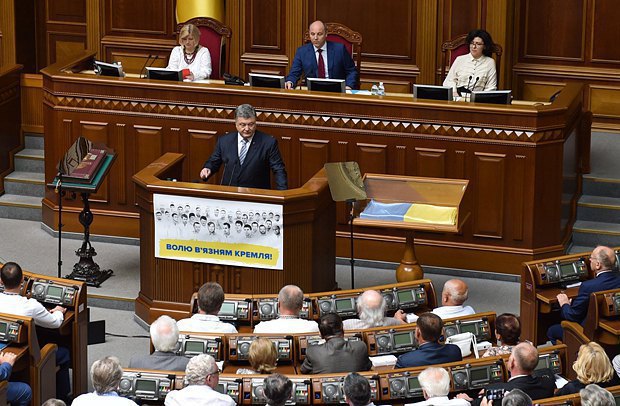 Photo: twitter.com/poroshenko
President Petro Poroshenko has said that the constitution will not be amended with regard to decentralization, meaning clauses stipulating a special status for some parts of Donbas, until a number of conditions is met.

He made this statement at the parliament sitting on the occasion of Constitution Day.

"It is obvious that in order to amend the constitution in this regard, there are clear preliminary conditions, first of all on security. There must be a full and long-term regime of cease-fire. Russia, as the aggressor state and the occupying state, must withdraw its troops, arms and hardware from the territory of Ukraine. The OSCE Special Monitoring Mission must have full access to the entire territory uncontrolled by Ukraine and ensure continuous monitoring of the temporarily uncontrolled sector of the Ukrainian-Russian border. Apart from this, the true disarmament of all illegal gangs on this territory must take place and the security zones must be established," he said.

The president also listed conditions for holding elections in Donbas.

"The deployment of an OSCE armed police mission is an important safeguard against armed provocations and a guarantee of cease-fire and safety of the future election process. A significant progress in the release of all hostages and Ukrainian political prisoners must be reached in parallel. I would like to stress it: local elections held not at the militants' gunsight but in line with our Ukrainian law and in clear correspondence with the OSCE criteria and standards must show who will use the new opportunities offered by decentralization in the interests of communities," he added.

"Only after these conditions are met, would I be ready to call on parliament to vote for these changes in the second reading. And I would like to calm you down: this is not going to happen today or tomorrow or on 4 July, as they lie, but when the clear preliminary security conditions are met," he said.

The president said that he made it clear to the EU leaders yesterday.

Elections in Donbas were planned by the peaceful settlement plan signed in Minsk.