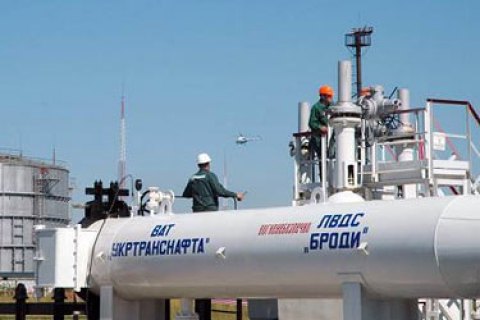 President of Azerbaijan Ilham Aliyev has said Azerbaijan and Ukraine are interested in implementing the Odesa-Brody oil transport project.

"We have seriously discussed the Odesa-Brody project because Azerbaijan supplies large volumes of oil to the European market," Aliyev said at a 14 July meeting with President Petro Poroshenko in Baku.

"This triangle has the potential for cooperation, and I consider that without doubt the role of the transport corridor is the key one in our cooperation," he said.

The Odessa–Brody is a crude oil pipeline between the Ukrainian cities Odessa at the Black Sea, and Brody near the Ukrainian-Polish border. There are plans to expand the pipeline to Płock, and furthermore to Gdańsk in Poland.

The pipeline was originally intended to reach Gdańsk in order to transfer oil from the Caspian Sea to the Polish Baltic Sea port and from there to the rest of Europe. The Pivdenny maritime terminal in Odessa and the pipeline between Odessa and Brody was built in May 2002 by Ukrnaftogazbud and operated by UkrTransNafta. UkrTransNafta was established to develop the commercial attractiveness of the Odessa–Brody pipeline. The pipeline remained unused until 2004.

However, as sufficient capacities of oil supplies were not agreed, on 5 July 2004 the Ukrainian cabinet accepted proposal of Russian oil companies to reverse the pipeline flow, and thus making it transfer Russian oil southwards to the Black Sea and from there to Mediterranean destinations.

Extending the pipeline to Adamovo is included in the list of EU priorities. It involves the construction of a 371 km pipeline between Brody and Adamovo in Poland.