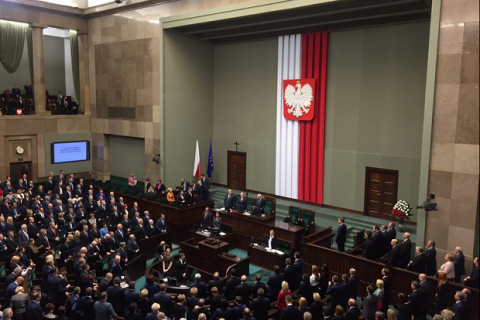 The Polish Seim, the lower chamber of the Polish parliament, adopted on 22 July a resolution recognizing the mass killings of Poles in Volyn (Volhynia) as genocide.

The resolution was adopted by 432 votes, with 10 abstained. None of the deputies voted against the bill, Radio Poland reported.

The resolution establishes 11 July as a National day of mourning and remembrance of the victims of genocide, committed by the Ukrainian nationalists against the residents of II Rzeczpospolita [Second Polish Republic] during WWII, Radio Poland reports.

The law also says that representatives of other nations, including Ukrainians, also died while trying to protect the victims. While recalling the crimes of the Ukrainian nationalists, the resolution reminds about the Polish retaliation, which also resulted in killings of civilians.

The document expresses solidarity with Ukraine currently fighting for its unity and independence against an external aggressor, and says that truth is the only way to reconciliation.

Earlier this month Polish Senate, the upper chamber of the parliament, urged Sejm to recognize the Volyn massacre as genocide and establish 11 July as the Day of Remembrance of Genocide Victims. The document has been approved by 60 out of 84 senators.