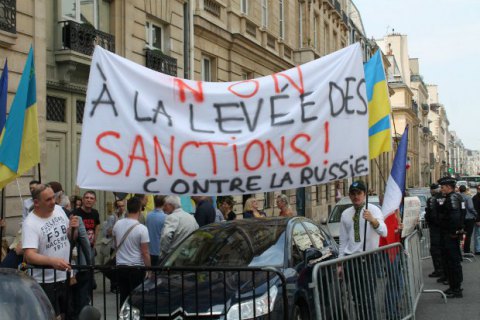 Ukraine is fighting for Western values while the West often gives up its values for trade with dictators, Ukraine's ambassador to Austria, Oleksandr Shcherba, has said in his article entitled "More pain, less fear" on the occasion of Ukraine's Independence Day. It was published in the Austrian newspaper Wiener Zeitung.

"Ukraine is desperately fighting for Western values while the West itself often gives up its own values for trade with dictators. Ukraine found its freedom when others give up their freedom. This freedom is being bravely fought for in the fainthearted world in which the word "democracy" is forced into the background by the word "pragmatism". Ukraine found its courage. Maybe it will help some in Europe to do just that," he said.

According to the ambassador, after Vladimir Putin's "green men" brought the war to Ukraine, there has been so much pain "but paradoxically less fear". "The country seems to be awakened. In the face of an existential threat, there is no capacity for self-deception," the diplomat said.

He recalled that on 24 August, Ukraine will once again mark the anniversary of independence "amid the Russia sabre rattling and loud discussions on whether to conquer the whole of Ukraine or not".

"Europe is facing the risk of a massive escalation of war. And yet Ukraine is not full of fear, it is full of hope. The hope to become a better in the face of adversity. Ukraine is moving on. Various groups of people find their voice, they address the most difficult issues," he believes.

As an example of such a discussion, he recalled Ukrainian women's recent campaign on the long unspoken issue of sexual violence (#Iamnotafraidtosay); the Pride Parade "whose participants were protected by police, not terrorised by them"; the "Willy Brandt moment" when the Ukrainian president knelt in Warsaw in front of the monument to the Poles killed by Ukrainian nationalists because "Ukraine cannot become a better nation without recognising its historical sins. The victims of the past must also find their voice."

"Nationalism, the until recently taboo topic, is also courageously discussed by society. Just like the problem of corruption and the question of efficiency of the state apparatus. It is important that Ukraine does not blame others for its problems. Ukraine is looking for reasons within itself," he said.

"And yet it is precisely in these serious internal debates there is something important for Europe: even in the worst time, freedom finds its way to the sun like a flower through the asphalt. Yes, Ukraine is still one of the poorest countries of the continent. Yes, Crimea is still under Russian occupation. Yes, occupied Donbas is still governed by people whose mentality comes from the Dark Ages. And yet this is the country where the hope of a better Europe is reborn," the ambassador is confident.