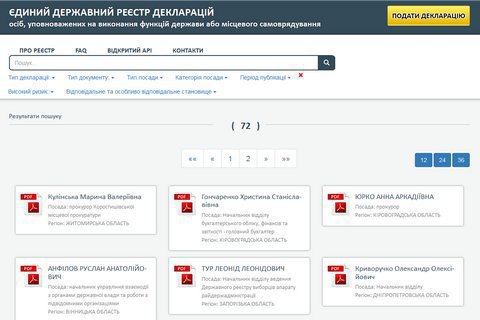 A falsified income statement of a member of the National Agency for Preventing Corruption, Ruslan Ryaboshapka, has appeared in the e-declaration system, MP Anton Herashchenko has said at a news conference called over the incident.

According to it, Ryaboshapka received 25m hryvnyas as a premium from Neyakisnyy Rozrobnyk (Poor quality developer) Ltd.

"In fact, we have shown that the developed e-declaration system is a thoroughfare for anyone who wants to break into the system and record any information without the consent of the owner of such information," Herashchenko later said on Facebook.

However, the company which developed the e-declaration system, Miranda Ltd, insists that it is not a burglary, and that a declaration was filed under an assumed name. Miranda's Oleksiy Vashukov told the press that it is impossible to change the tax identification number while doing this, according to 112 Ukrayina TV.

On 15 August, Ukraine launched the electronic declaration without proper certification of its data protection module. Two days later, the authorities decided not to accept the declarations on concerns about the system's performance. The State Special Communications Service was instructed to finalise the system by September 1, while the developer was accused of sloppy job.