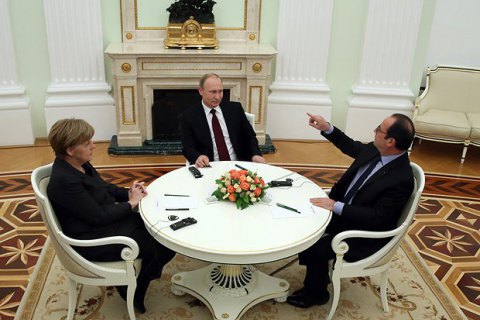 Russian President Vladimir Putin, German Chancellor Angela Merkel and French President Francois Hollande, which was to discuss the situation in Ukraine, has failed, TASSreported on 30 August

Russian presidential aide Yuri Ushakov said that instead, Putin will hold two bilateral meetings - with Hollande on September 4 and Merkel 5th of September.

"There will be a separate meeting with Hollande on 4 September and a meeting with German Chancellor Merkel. Both meetings will center on Ukraine," said Ushakov.

On 23 August, the Kremlin press service said that Putin, Merkel and Hollande will meet to discuss Ukraine at the G20 summit that will be held on September 4-5.

Previously, Putin has used the story of the so-called "Crimean saboteurs" to refuse to negotiate in the Normandy format, i.e. involving not only Merkel and Hollande, but also the President of Ukraine Petro Poroshenko.

It was assumed that all leaders of the Normandy Four will meet in the framework of the G20 summit.