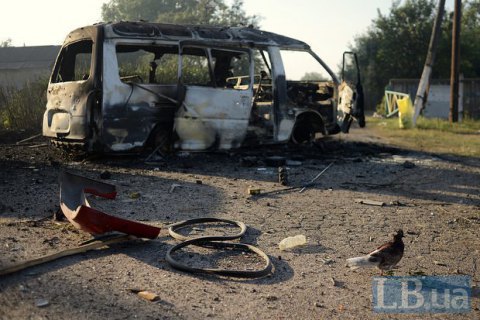 Based on the findings of a military investigation, the Prosecutor-General's Office has named the Russian Armed Forces' direct invasion as the main cause of the Ilovaysk tragedy.

"The largest by its scale invasion by the Russian Federation took place at 4 in the morning of 24 August 2014. Russia's invasion forces included nine battalion-tactical groups. Up to 6,000 troops of the Russian Armed Forces crossed the Ukrainian border," Prosecutor-General Yuriy Lutsenko said at a meeting of the parliamentary committee for national security and defence on 2 September.

He was reporting on the investigation into the facts of Russia's aggression in eastern Ukraine.

As a result of the Russian Armed Forces' invasion and their march towards Ilovaysk on 24-25 August 2014, the Dnipro-1, Myrotvorets, Svityaz, Kherson, Ivano-Frankivsk battalions and the National Guard's Donbas, and the troops of the B sector found themselves encircled.

An oral agreement with Russia on a safe withdrawal of the troops from the encirclement was reached several days later, on 28 August. Three captured Russian airborne troops were considered an additional guarantee to the agreement.

However, on 29 August, acting on the direct order of the Russian General Staff, the Russian Armed Forces shot pointblank with heavy weapons on a column of Ukrainian servicemen with three captured Russian airborne troops.

As a result of this massacre, 366 people were killed and 429 wounded, while 300 were captured. The losses inflicted on the Ukrainian Armed Forces amounted to nearly 300m hryvnyas.

The investigation gave grounds to accuse two dozen Russian senior officials. Lutsenko said each of them would be tried in absentia.

"Either Kyiv or the Hague, there is no other way," he said.