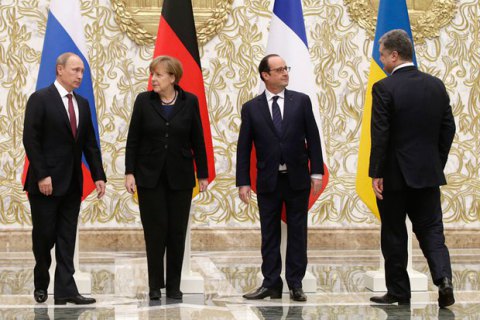 French President Francois Hollande announced a meeting of Normandy Four in the near future.

"We have agreed to organize in the coming weeks a summit between Germany, France, Russia and Ukraine", Hollande wrote on his Facebook page after a meeting with Russian President Vladimir Putin on 4 September.

He also stressed the need for the implementation of the Minsk agreements to resolve the situation in the east of Ukraine.

"As for Ukraine, we have to continue the Minsk process, to resolve urgent issues, including - for the implementation of a special status, in the security situation and the lack of confidence between the parties," stated the president of France.

In addition, Hollande pointed out at the first plenary session of the G20 summit on Sunday to "considerable uncertainties" on both political and economic fronts. Hollande said that one of the key objectives should be to find a political solution in Ukraine and Syria.

The Russian Foreign Ministry announced on 11 August about Russia's refusal to participate in the Normandy format negotiations. This happened after the Russian occupying authorities arrested several Ukrainians in Crimea and accused them of preparing "sabotage operations" allegedly ordered by the Main Intelligence Directorate of the Ukrainian Defence Ministry.