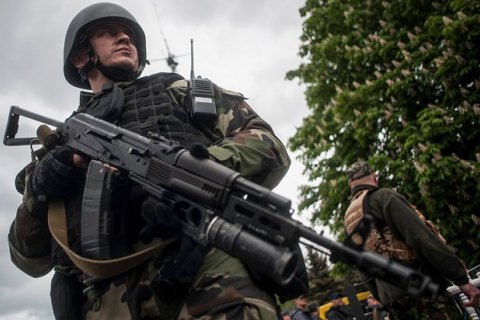 Over the past day The Russia-backed separatists 37 times opened fire on positions of Ukrainian military in the zone of the antiterrorist operation in Donbass, the press center of the ATO reported on 12 September on Facebook.

"The shelling and actions of the occupiers are mostly unsighted and provocative, and are aimed to trigger fire by the Armed Forces of Ukraine, but Ukrainian defenders steadily adhere to the Minsk agreements," the report emphasized.

In Mariupol sector, 20 ceasefire violations took place. Militants launched provocations in the area of Vodyane and shelled Ukrainian strongholds from 122-mm artillery. The defenders of Shyrokyno were shelled 82mm mortars. Also, the militants fired BMP-installed weaponry in Shyrokyno, while Hranitne, Maryinka, Starohnativka and Talakivka were under fire from rocket-propelled grenades, machine guns and small arms.

In Donetsk sector, the enemy fired grenade launchers, machine guns and small arms at the positions of Ukrainian defenders in the areas of Avdiyvka and Luhanske.

Ukrainian military last week detained a drunken militant from Moscow. The detainee arrived to fight in Donbass in early 2015, and took part in the Battle of Debaltsevo, and later was transferred to Horlivka region. He said that his battalion commander and brigade commander were Russian officers. Investigation is underway.