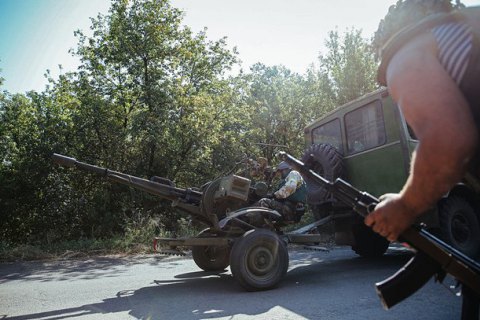 Over the past day, the Russia-backed separatists 30 times opened fire on the positions of Ukrainian military in the zone of the antiterrorist operation in Donbass, the press center of ATO reported 16 September on Facebook .

The ceasefire was breached 12 times in Donetsk sector as militants fired grenade launchers, machine guns and small arms at ATO position in Avdiyivka, Verhnyotoretske and Zaitsevo. In addition, terrorists opened shelled Zaytsevo from 120-mm and 82-mm mortars. An enemy sniper was active in the area opf Verhnyotoretske.

In Mariupol sector, there were 16 violations of the ceasefire. The occupation troops have resorted to armed provocations and fired rocket-propelled grenades and small arms near Shyrokyno, Maryinka, and Novotroyitske.

"ATO forces did not return fire," said the headquarters.

According to the UN, at least 9,578 people have been killed and 22,236 wounded in eastern Ukraine since the beginning of the conflict.