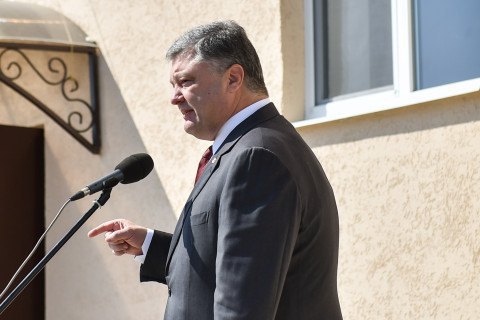 The termination of shellings in Donbas and the withdrawal of Russian troops are key conditions for the continuation of political settlement in Ukraine, President Petro Poroshenko stated at the opening of the international conference Yalta European Strategy (YES) on 16 September.

"Not a single step forward until the Russian side withdraws its troops to a safe distance and implements due security measures ... We will not get into the trap of prioritizing political aspects of the Minsk agreements," Poroshenko said.

"Ukraine demonstrates good will and responsibility, and makes clear steps toward a peaceful settlement, while Russia is doing nothing. Zero. In addition they are trying to shift responsibility and blame someone else," the head of state said.

"This is not a civil war, not a conflict in Ukraine. This is nothing else but Russian aggression against a sovereign and independent, free and democratic Ukraine," he stressed.

On 14 September, French Foreign Minister Jean-Marc Ayrault said a special status must be given to Donbas, while German Foreign Minister Frank-Walter Steinmeier said that the political and security packages of Minsk agreements should be implemented in parallel.

On the next day, the Minister of Foreign Affairs of Ukraine Pavlo Klimkin denied that France and Germany twist Ukraine's hands to adopt a law on local elections and granting special status of Donbass.

"They do realize that things must move along the political path, through the release of hostages. Nothing can happen without any of these components, and this is what they mean by'parallel movement'. They do not force us, and you can ask them yourselves", Klimkin said.

"Any other course of action would simply legitimize Russia's stooges," the minister concluded.