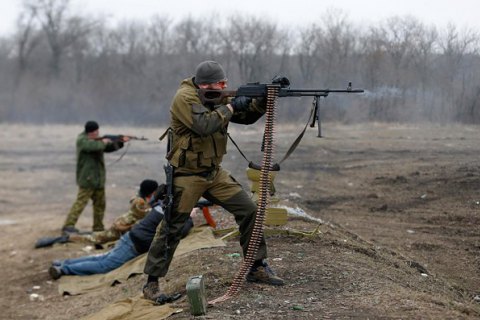 Over the past day the Russia-backed militants 30 times opened fire on the positions of Ukrainian military in the zone of the antiterrorist operation in Donbass, ATO press center reported on Facebook on Thursday, 20 October.

In the Mariupol sector, 21 provocations were reported. Ukrainian positions in the areas of Maryinka, Pavlopil, Lebedynske, Slavne, and Shyrokine and Starognativka, the terrorists fired heavy machine guns, grenade launchers and small arms. In Krasnohorivka the enemy used 82 mm and 120 mm mortars. Vodyane was shelled from 122- and 152-mm artillery.

In the Luhansk sector, the ceasefire was breached four times. The militants fired grenade launchers, machine guns and small arms at the positions of Ukrainian military in the areas of Novozvanivka and Novooleksandrivka. Stanytsya Luhanska was also shelled from 82-mm mortars.

One Ukrainian soldier was killed in combat and another wounded last day in Donbas.