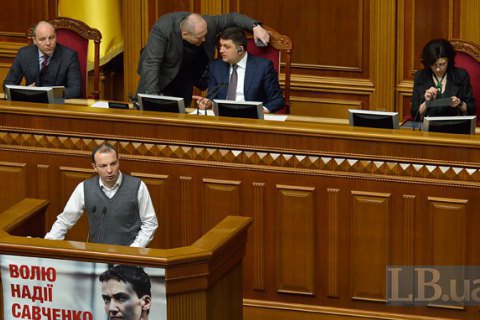 Verkhovna Rada deputy Yehor Sobolev (Self-Help) says that Prime Minister Volodymyr Groysman over the first six months of his premiership has done nothing to worsen the situation in the country, which, in the MP's belief, is a step forward.

"He has not drafted new tax rules and failed to appoint decent heads of the Customs and the state Fiscal Service. On the other hand, he did not do anything wrong, which, all things considered, is clearly a step forward," Sobolev told reporters on Wednesday, 19 October.

"I wish that he had not stop at this stage. The main thing is that he should realize that he is not a protege of the president, but a prime minister. He should distance from oligarchs and begin a fair privatization and ease the pressure on business. It that case, not just the Self-Help, but all the people will support him," an LB.UA reported Sobolev as saying

He also praised the work of the Ministry of Health under the new minister.

"The acting Minister of Health Ulana Suprun is set to implement a real health-care reform so the money followed the people. Doctors must be paid for the services they render. In that case they would be interested that people were healthy, because now the other way round. If the prime minister supports [the reform] everything will be done," said Sobolev.

He also praised the Cabinet for other "good initiatives."

The Cabinet of Ministers is planned to present a report on the six months of its work at a meeting on Wednesday, 19 October.