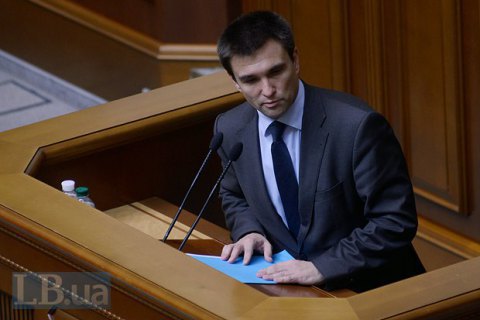 Elections in some districts of Donetsk and Luhansk regions, envisaged by Minsk Agreements, are unlikely to take place any time soon, Foreign Minister Pavlo Klimkin said in parliament on Friday, 21 October.

"We are a long way from being able to start organization of the elections, since before that we must make sure that all the necessary security precautions are in place. The fulfilment of these conditions will be assessed both by us and the OSCE, in particular the Office for Democratic Institutions and Human Rights," the minister stated.

Klimkin confirmed that Ukraine has withdrawn from its earlier demand that the elections should be held only upon the return of control over the Russian-Ukrainian border. Ukraine has agreed that for the duration of preparation and holding of elections, the border will be monitored by the OSCE, he said.

Ukraine must regain control over its border "on the second day after the elections."

"First, there will be full monitoring [of the border] by the OSCE, the development of border control plans, and on the very next day after the elections – the transfer of the border under the control of Ukrainian border guards. Such logic was originally laid down in the Minsk agreements, and has never changed," said the minister.

Before the Norman Four talks in Berlin, President Petro Poroshenko said that Ukraine should regain the control over its border prior to holding the elections in Donbas.