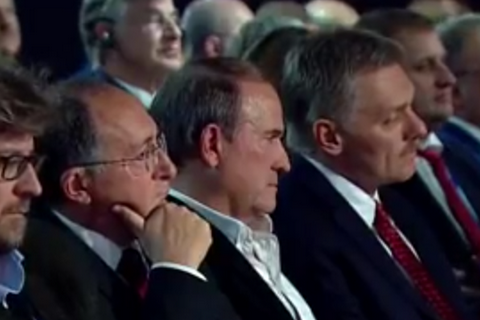 Viktor Medvedchuk, who represents Ukraine in one of the subgroups at the Donbas settlement talks in Minsk, attended the meeting of the Valday international discussion club in Sochi on 27 October.

At the final session traditionally attended by Russian President Vladimir Putin, he was sitting next to Putin's press secretary Dmitriy Peskov.

In April 2016, the Prosecutor-General's Office opened proceedings to check Medvedchuk's possible involvement in state treason, separatism and financing of terrorism.

However he continues to be engaged in the humanitarian subgroup of the trilateral contact group on a Donbas settlement. He works on the release of hostages held in Russia and occupied areas.

Medvedchuk is the leader of the Ukrainian Choice organization. His daughter's god father is Putin.