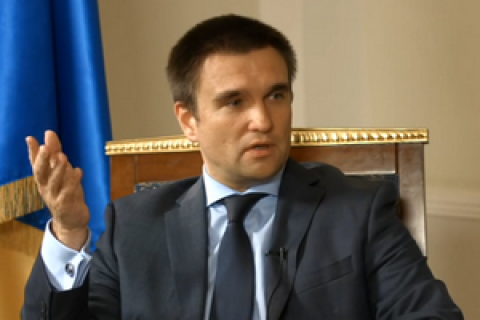 Ukrainian Foreign Minister Pavlo Klimkin has said that a Normandy Four meeting, scheduled for 19 October, is to show whether Russia can implement the Minsk agreements on a Donbas settlement.

"Tomorrow's meeting in Berlin on the eve of the European Council meeting is a true test for Russia to implement the Minsk agreements," he tweeted.

Klimkin said on the air of 112 Ukrayina TV that it was German Chancellor Angela Merkel's idea to arrange the four leaders' meeting. It is expected to show whether consistent pressure can be further put on the Russian leadership with regard to the Minsk agreements.

"This must be done before the European Council [meets] where the issue of relations with Russia will be discussed. Therefore it is very important exactly in this context," he added.

The minister said that Ukraine was working on a roadmap for the implementation of the Minsk agreements, according to which the clauses on security and release of prisoners must be implemented before the parties can proceed move on to political clauses.

He repeated President Petro Poroshenko's words that there should be no special expectations from Ukraine.

The four leaders of the Normandy Four states – France, Germany, Ukraine and Russia – will meet for the first time in a year in Berlin late on 19 October.