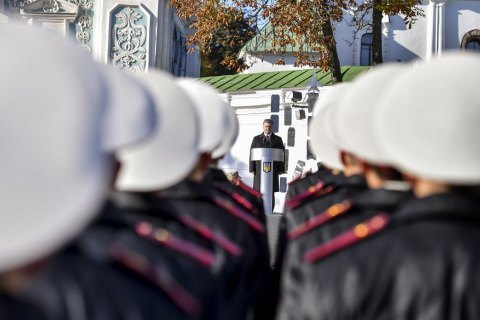 President Petro Poroshenko has said that 57,000 Ukrainian volunteers have signed up contracts to serve in the Armed Forces, National Guard and other security agencies. Meanwhile, the reserve has been formed out of demobilized servicemen with combat experience, his website quoted him as saying.

"Only this year, 57,000 Ukrainian volunteers have signed contracts. And the operational reserve of almost 100,000 servicemen has been formed out of those who have already completed military service and come back home. We have already completed the first serious military training of reservists in the history of our country," he said at the ceremony of taking oath by students of Kyiv's Ivan Bohun Military Lyceum on Day of Defender of Ukraine.

According to Poroshenko, over two and a half years, about 280,000 Ukrainians have been involved in the antiterrorist operation in the east, of whom 266,000 have already been granted the status of combatant. He appreciated the contribution of every serviceman to the protection of independence and territorial integrity of Ukraine.

“First of all, I see people's fate in reports, words, numbers, arrows and symbols on the map. The most important thing in war is not money, equipment or weaponry, but people - Ukrainian warriors," he emphasized.

The president noted that more than 10,000 soldiers had received state awards. Thirty-three Ukrainian veterans had been conferred the title of Hero of Ukraine.

The ceremony commemorated 2,533 servicemen who sacrificed their lives defending Ukraine from the aggression of Russia with a moment of silence.