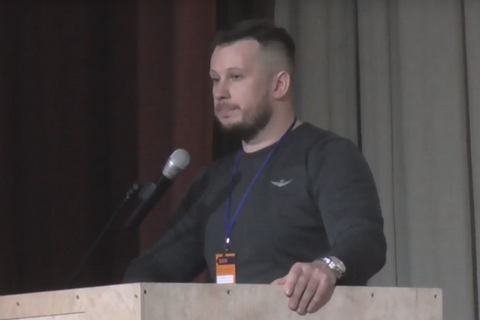 The National Corps party had its founding congress in Kyiv on 14 October. MP Andriy Biletskyy was elected its leader for four years.

The party was formed as a result of renaming the Patriot of Ukraine party.

Nazar Kravchenko was elected the party's first deputy chairman and Mykola Kravchenko as deputy party chairman. Although they have identical surnames, they are not relatives.

Addressing the congress delegates, Biletskyy said the National Corps would be a direction-action party. "No words, billboards, time wasted on TV shows and debates," he said.

"The country lacks people who know how to do work. Those who can replace words with deeds. Those who can defend the country instead of talking about it. The country has had enough, the country has had enough words, enough parties with good names and manifestos. Enough fake wins in international diplomacy, which turned out to be capitulation. We have had enough military victories made up in the offices of generals and TV channels. We have had enough of high-ranking corrupt officials' promises to fight corruption. Enough of fake reforms from fake reformers," Biletskyy said.

The party speaks for restoring Ukraine's nuclear potential, nationalization of strategic enterprises and legalization of firearms.