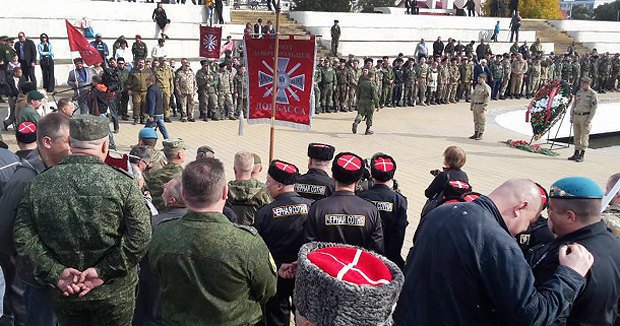 Photo: deniskazansky.com.ua
Rostov-on-Don hosted a congress of Donbas "volunteers"
Russia's Rostov-on-Don hosted the second congress of the Union of Donbas Volunteers (UDV) on 8 October. Its participants included the Cossacks, members of the Black Hundreds and their leaders. The organisers said there were 500 delegates whereas in fact there were not more than 200. The event was moderated by Aleksandr (Oleksandr) Boroday, who used to head the so-called Donetsk people's republic in its very beginning and, before this, according to open sources, he was no less than a deputy director of the Russian FSB (Federal Security Service) for information policy and special projects.

The venue for the meeting was not chosen by chance - Rostov has been a transfer point for military hardware and personnel going from Russia to Ukrainian Donbas. And it is here that most of the fighters who returned from the war have settled.

The publicly announced goals of the UDV include social assistance "to the families of war veterans in the LDPR [Luhansk and Donetsk people's republics]". The unspoken task is to keep thugs, who are now experienced in combat, under control and constant supervision of the authorities to make sure they do not try to make trouble in Russia.

Boroday solemnly reported to the audience that "the number of organization members has increased from 1,500 to 10,000 over the year, with nearly 2,000 more volunteers currently being at the stage of acceptance". He could not do without the ritual speeches about the "Russian world that is divided and about a part of the soul which volunteers left in Donbas".

The UDV found himself in an awkward position because of the leadership of Russia: it was previously announced that presidential adviser Vladislav Surkov, who oversees Donbas, would come to Rostov to meet the volunteers. However, there was a "last minute" cancellation, and Boroday had to make excuses that Russia leaders reportedly had "a busy schedule on the eve of some important events that will take place next week."

Also, Boroday mysteriously announced that "a lot of interesting events concerning the fate of Donbas" are going to happen as early as this week, and these changes are supposedly "for the better". And that certain work, "hidden from public opinion", is being done now. 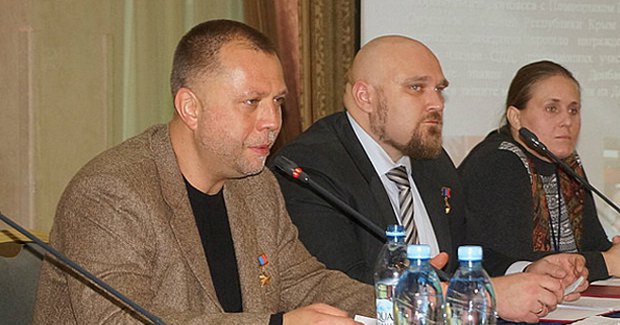 In addition, Boroday urged the delegates in the audience "not to forget the past experience". "The situation around the Russian Federation is not easy. Although there are cameras, I have a feeling that we will have to recall our recent past (and for some people here, it is their present) - and we will have a chance to fight for our Motherland again," the "volunteer" leader said ambiguously.

But, despite Boroday's solemn rhetoric, the mood among the "militia" on the sidelines was rather skeptical.

Some participants in the congress told LB.ua that the essence and tone of discussions shows that the ideological foundations of the war in Donbass are still absent while the strategy of the "Russian world" has been finally undermined and discredited even among its most motivated activists. Many of the "militia" members wondered loudly and clearly "who needed this at all": who needed Ukrainians and Russians to die, who needed the current destruction and devastation if the objectives have not been met after all?

For instance, one of the failed promises, which they mentioned, concerned an establishment of a "Cossack republic" on the territory of the Luhansk people's republic. The Cossacks recalled that this promised was made by Vladislav Surkov himself (Is it the reason why he did not dare to come to the congress?).

Most likely, the promise was made after the Cossacks openly demanded that the Russian authorities recognize them as an independent nation at mass rallies which started in Rostov-on-Don in January 2013.

Apparently, they were sent to fight against Ukraine with one simple goal - to further neutralize (physically destroy) the active elements and remove them from the Russian political agenda.

We already know how this "Cossack free pass" in occupied Ukrainian Donbas eventually ended up: the Cossacks have not secured any "republics" while their leaders were either killed (Pavel Dremov), or, like Nikolay Kozitsyn, were brought back to Russia and practically placed under house arrest.

However the key failed promise is for Russia to annex Donbas, the way it happened to Crimea. "By the end of October, Russia will have recognised the LDPR," some congress participants quoted certain insider information as saying on the sidelines. 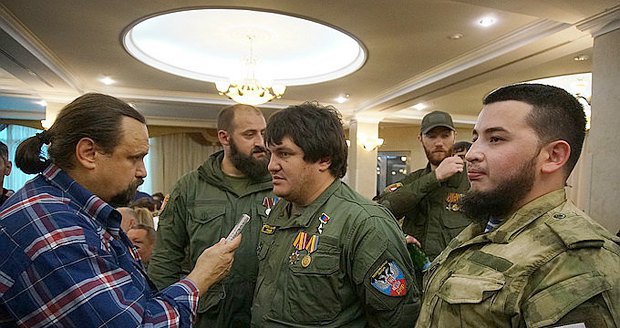 Photo: www.politnavigator.net
On the sidelines

However, LB.ua's sources in the Russian presidential administration do not confirm these allegations: "there will be nothing like this".

A "canard" may have been used to make militants less aggressive at least during the congress. Thus the next and unattainable "carrot on a stick length" appeared right before the mercenaries' noses.

However, given the number of the Kremlin's reckless steps recently, one cannot rule out anything. And if the LDPR are recognized after all, this step will be a true boon to Kiev and the West: by destroying the negotiation process (Minsk-2) with its own hands, Moscow will have officially recognised the occupation of more Ukrainian territories. This means that the existing sanctions against the Russian Federation will become infinite. And it will not be long before the new ones.

Not to mention the fact that in this case the Kremlin would add another financial yoke to its neck: as we know from Prime Minister Medvedev, "there is no money" in the budget.

And Boroday's promise to "volunteers" that they will have "a chance to fight again" can be interpreted as Moscow's intention to continue to get rid of potentially dangerous elements in accordance with the original plan. After all, the discontent of former rebels both with the situation in occupied Donbas and in Russia itself has not disappeared but has increased significantly.