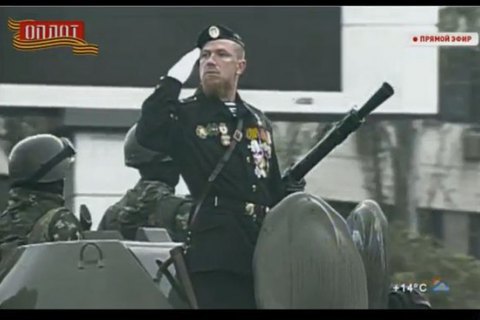 The Russian news agency Interfax has quoted its sources as saying that senior pro-Russian militant Arsen Pavlov, better known as Motorola, was killed as a result of the explosion of an elevator in his house in Donetsk.

The leadership of the self-proclaimed Donetsk people's republic (DPR) confirmed his death.

"According to preliminary reports, Motorola was killed a result of a terror act by a Ukrainian reconnaissance and sabotage group. When he returned home, a remotely-controlled explosive device exploded in the elevator," the so-called DPR defence ministry said.

On 5 September, President Petro Poroshenko said Motorola must be prosecuted for the abuse and killing of Ukrainian servicemen.

Russian national Pavlov came to Donbas in 2014 to "protect the Russian world". He joined Igor Girkin's gang in Slovyansk and later formed his own Sparta unit.

Motorola joined the ranks of militant commanders killed in the past two years: Pavlo Dryomov (Batya) was killed in an explosion in December 2015, Oleksiy Mozzhovyy was shot dead in May 2015, Yevhen Ishchenko (Malysh) and Oleksand Bednov (Betmen) in January 2015.