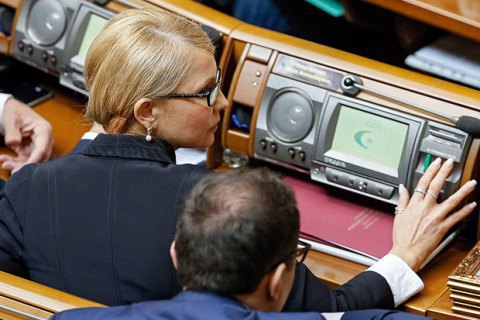 The leader of the party Fatherland Yulia Tymoshenko listed five reasons why her faction will not vote for the draft national budget for 2017.

"This budget is a total corruption and poverty. We will never vote in support of this budget," the former ex-premier said in an interview with Sonya Koshkina on the Left Bank talk show .

The first reason, which Tymoshenko named is the decision to retain the existing utility tariff policy. Secondly, local budgets are made responsible for education and healthcare expenditures totalling 16bn hryvnia. Thirdly, the Fatherland believes that raise of the minimum wage to 3,200 hryvnia, offered by the Cabinet, was a deception.

Tymoshenko lambasted the preferential tax treatment of companies, handpicked by the government, through "industrial parks" and stated against the 29bn hryvnia in VAT reimbursement to agricultural companies "that have not earned that".

On October 20, the Verkhovna Rada adopted in first reading the draft state budget for 2017. On 31 October, the relevant resolution was signed by the Speaker and returned to the Cabinet for finalization before the second reading.