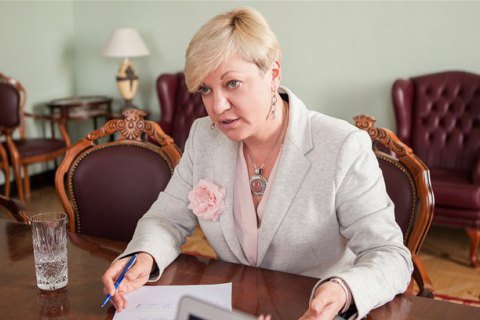 The governor of the National Bank of Ukraine (NBU), Valeriya Hontareva, has warned that political instability and parliament's inability to pass laws will negatively affect the economic stability of Ukraine.

"This year we have three times changed our forecasts for currency reserves. Currently, our baseline forecast is 17.5bn dollars, but this forecast includes 600m euros from the European Union and 1.3bn dollars from the International Monetary Fund. Unfortunately, we face a very great risk of being left without that tranche this year, and will have to review our forecast," she told the NBU Board on 23 November.

It is not critical if the tranche arrives at the beginning of 2017, she went on, but if the tranche does not come at all, it will have a very heavy impact on the reserves of Ukraine.

"Next year, we expect to receive four tranches from the IMF worth 5.4bn dollars. We need to pay more than 2.5bn to service our debts and have to return the first tranche of 1bn dollars on the stand-by programme, which was launched in 2014. Our forecast on the current account for the next year is minus 2.9bn dollars so I want everyone to understand: we have reserves at 15.5bn dollars. We will start to lose these reserves on a daily basis," Hontareva warned.

She stressed that political innuendos, flirting with populism undermine the stability of the state.

The NBU governor called on parliament to speed up the adoption of laws.

"Last week, they failed to vote on a very important bill on the protection of creditors that the banking system has been expecting for more than a year now. It got the support of five out of 12 members of the parliamentary committee, so it has not even been sent for consideration. This is unacceptable. Our banking community cannot understand how it can resume lending if there is no protection of creditors' rights," Hontareva said.