The vast majority of Ukrainians (78 per cent) believe that things in Ukraine are going in the wrong direction, as evidenced by a poll by the sociological group Rating held in November 2016.

Only 11 per cent of respondents believe that Ukraine is on the right track, RBC-Ukraine said. 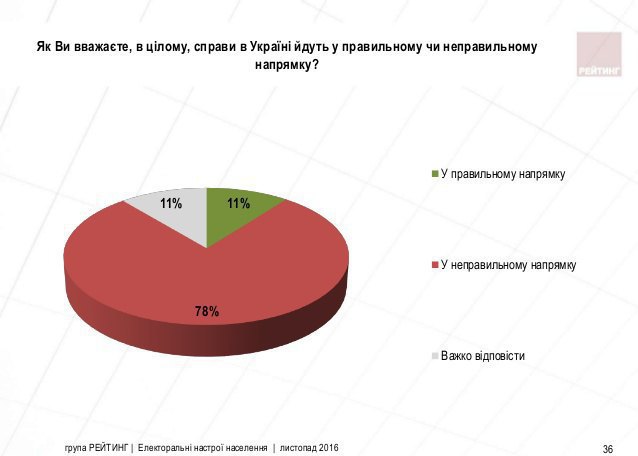 Some 69 per cent of respondents believe that the responsibility for the current economic and social situation is on President Poroshenko, 36 per cent blamed ex-Prime Minister Arseniy Yatsenyuk, 32 per cent - Yanukovych, while 30 per cent named incumbent Prime Minister Volodymyr Groysman.

Some 46 per cent of respondents spoke in favour of the president's resignation and an early parliamentary election, 42 per cent did not approve of these prospects.

The dissolution of and new election to parliament were supported by 45 per cent of the respondents, 42 per cent were against.

The face-to-face poll was held on 10 to 17 November, embraced 2,000 Ukrainians aged above 18, duly sampled in terms of age, sex, region and type of settlement of residence.

The margin of error does not exceed 2.2 per cent.