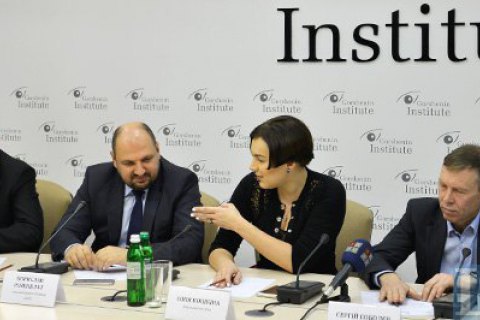 Ukrainian lawmakers in the ruling coalition and the opposition differ in their assessment of challenges wich Ukraine will face in the next year, as evidenced from the politicians' statements at the roundtable in Gorshenin Institute on 21 December.

In particular, MP Borys Rosenblat (PPB) believes that the most important thing in the next year is to prevent political squabbles.

"I am not going to expand on war and other external threats. We are talking about the internal strife, the political struggle for the electorate. This is where the biggest threat is. It's two Ukrainians - three hetmans. This is where the root of all evils is," Rosenblat said.

MP Serhiy Sobolev (Fatherland), in contrast, believes that the main challenge for the country is the foreign policy.

"A lot of myths are bound to be debunked about the United States policy, because after all that aggravation over the past six months has left the official structures of Ukraine with no contacts with the person who will assume the powers of the president of the United States on 20 January. I think we must avoid the same mistakes with key countries like France, where the same slogans are being used again," he said.

"Among the internal factors is what happening around the occupation of Crimea, [the conflict] in the territory of Donbass, and how the situation will unfold there. The third factor are the reforms which look swell in bills, but poorly implemented," said Sobolev.

MP Lyubomyr Zubach (Self-Help), in his turn, says that the main challenge that Ukraine will face the next year will be linked to the war in Donbas and budget decentralization.

"Fiscal decentralization has in fact been wrapped up, so I cannot be too optimistic. In addition, I am concerned about the military conflict in the east. Unfortunately, the Ukrainian state has no clear position on the settlement of this conflict," he said.