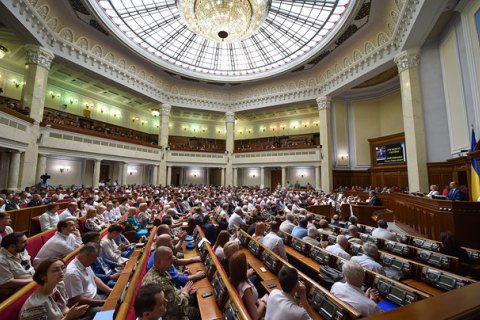 The Verkhovna Rada in the early hours on Wednesday passed the bill on the state budget for 2017.

The second reading of the bill was endorsed by 275 votes. The final reading got the support of 274 deputies, including:

122 MPs of the Petro Poroshenko Bloc;

5 - Self-Help (the majority of faction abstained);

Fatherland and the Opposition Bloc did not give a single vote in support of the budget bill.

Revenues of the 2017 budget are expected to reach 721bn hryvnia, expenditures - 790bn hryvnia. The budget deficit is set at 3% of GDP. The bill is on the hryvnia exchange rate outlook at 27.2 hryvnia for one dollar.

The final text of the budget was still in the works at the time of voting.

"The basic principles of the budget is it's realism (expenses secured by realistic income; for example, an increase in the minimum wage will be covered by deshadowisation of economy and the recovery in demand and growth; prospects (budget developed based on the forecast of economic indicators for the next 3 years); privatization (defined government priorities is further supported by financial resources), as well as the transparency of the (budget submitted on time to ensure the quality of discussion with the parliament)," Finance Minister Oleksandr Danyluk told lawmakers.

He said the budget priorities will be increasing the defence capabilities and social standards, the development of education, healthcare, targeted support for agriculture, development of roads, encouraging energy efficiency, development of culture and support of local budgets.

Danyluk said that the 2017 budget takes into account the increase in the minimum wage twice to 3,200 hryvnia.

The lawmakers burned the midnight oil well into the small hours, so there will be no plenary session on Wednesday.

The government submitted to the 2017 budget bill in the middle of September, as required by the rules of the Budget Code. Traditionally, the budget in Ukraine was approved in late December, but the government wanted the bill to be adopted in time, ie before 1 December. The Rada adopted in first reading of the budget bill on October 20, but the following readings have been delayed for two months.