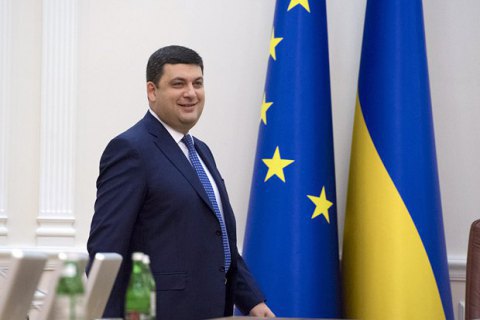 Prime Minister Volodymyr Groysman said that the recent slump of the national currency has nothing to do with a twofold increase of the minimum wage.

"I would like to tell those experts or politicians that tie [the hryvnya dive] to the minimum wage: 'You fools, look in the mirror'. We have not paid January minimum wages yet. It will happen in February, so it could hardly influence the exchange rate of the hryvnya," the 112 Ukrayina TV channel quoted the prime minister as saying during a visit to Chernihiv Region on 17 January.

Groysman said the fluctuations in the exchange rate were seasonal.

"There have been many payments of salaries and benefits, so the pressure on the national currency exchange rate has increased during this time, including holidays, while business activities have dropped. That's quite normal," Groysman said.

"On the other hand, I talked with the head of the National Bank yesterday and she assured me that the NBU will do everything to prevent speculative fluctuations and calm down the situation. We have sufficient foreign currency reserves to mitigate currency fluctuations," he said.

The official exchange rate for 17 January was set at 27.72 hryvnyas per dollar.

The minimum wage in Ukraine has increased from 1,600 to 3,200 hryvnyas since 1 January this year.