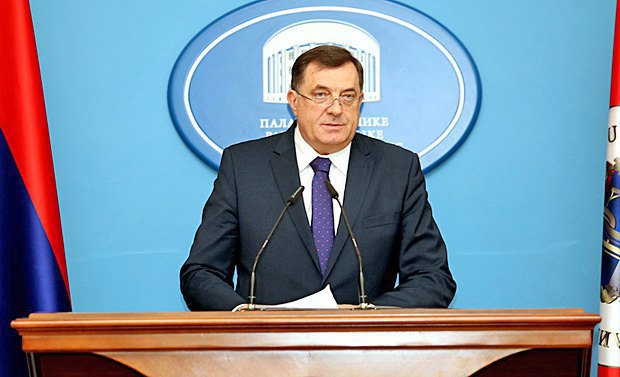 Another quite serious escalation may happen in the Balkans. This is an opinion shared by several European and Ukrainian experts in connection with the statements made by the senior leadership of the Serb republic (Republika Srpska), a constituent member of Bosnia and Herzegovina. In particular, its leader Milorad Dodik recently said that Bosnian Serbs should better form a single state with Serbia and Serb territories in Kosovo.

Dodik earlier said that Bosnia has no future as a state and that its constituent parts – the Serb republic and the Muslim-Croat federation – should divorce peacefully. Bosnian Serbs, in his opinion, should form a single state with Serbia and Serb municipalities in North Kosovo, which would later be joined by Montenegro. Thus he announced plans to hold a referendum on the secession of the Serb republic in the first half of 2017.

Kolinda Grabar-Kitarović, president of neighbouring Croatia, said that Dodik's statements are a result of the Kremlin's involvement in the "hybrid war" in Bosnia.

Many attest the recent spike in separatist sentiments directly to Moscow's attempts to prevent Bosnia and Herzegovina from joining the EU. "It is important to reassure Russia in spite of the atmosphere that you get from the Kremlin and from [Russian President Vladimir] Putin. In spite of that, we need to continue to reassure Russia that none of this is aimed against Russia, this is for the protection of the NATO territory and that NATO is a defence alliance," she said. 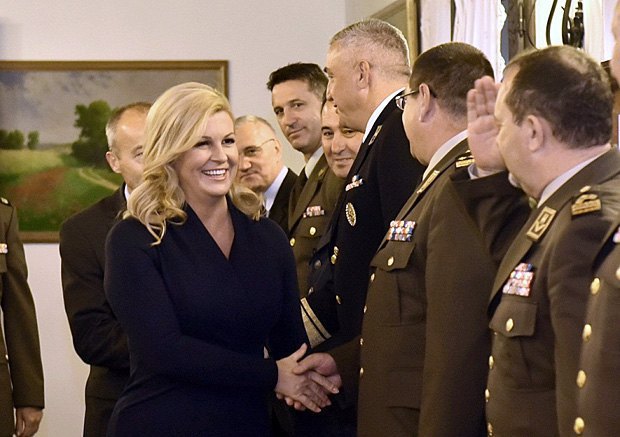 In fact, the Croatian leaders' suspicions are not groundless. It is a fact that Milorad Dodik's connections with the Kremlin and even Russian intelligence are so obvious that they can be tracked through open sources of information.

For example, back in July 2015, there was a report on the website of the Russian Institute for Strategic Studies under the presidential administration (previously under the Foreign Intelligence Service) which said that its director Leonid Reshetnikov was awarded The Order of Petrović Njegoš "for merits and notable personal contribution to the development of scientific and cultural cooperation between Russia and the Serb republic, which is of huge importance to the establishment of the Serb republic." 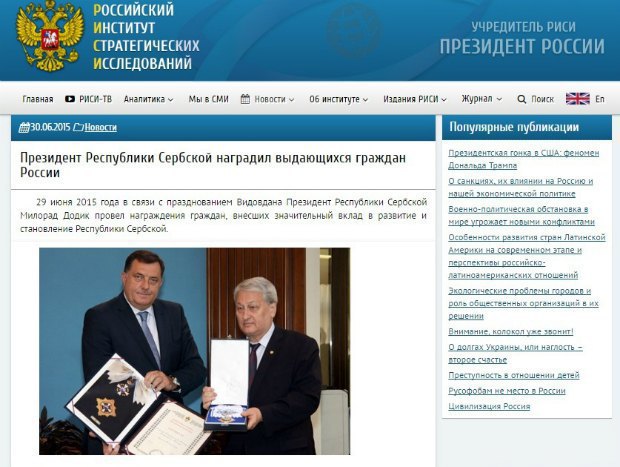 Also awarded were Putin's aide Igor Shchegolev "for exceptional merits in the post-war development of the Serb republic", "Orthodox" businessman Konstanin Malofeyev (Ukrainians know him as the financier of the war in Donbas) for his "activity and achievements of huge importance to the establishment of the Serb republic", the president of the international union "Heirs of Victory", Valeriy Kalyakin, for his "personal contribution to the strengthening of cooperation between the veteran organizations", and the board chairman of the League of Safe Internet, Denis Davydov.

They received their awards from the hands of Serb President Milorad Dodik.

To understand the sources of such close links, we should recall that the Serb republic as a constituent component of Bosnia and Herzegovina was officially formed in 1995. Its recognition was preceded by the bloody Bosnian war, which in certain ways was similar to the current developments in Ukraine.

The war started as a result of the split of Yugoslavia, with republics naturally coming off it the way it happened to the USSR. One of Yugoslavia's constituents, Bosnia and Herzegovina, held its independence referendum on 29 February 1992. However its Bosnian Serb residents, making around 31 per cent of the total population, did not agree with the referendum results and set up their own republic which is very similar to today's Luhansk and Donetsk people's republic. A war broke out.

Bosnian separatists' cause was supported by the Serbian government headed by Slobodan Milošević and the Yugoslav People's Army in the same way the Russian army is supporting Donbas separatists today. Soon the warfare spilled over to the entire territory of the republic. The war marked by ruthless combat, sporadic shelling of towns and villages, ethnic cleansing, mass rape, genocide and other "pleasures" of the "Serb world". It became possible to stop the massacre only with the help of NATO which interfered and held a military operation against the Bosnian Serb army. 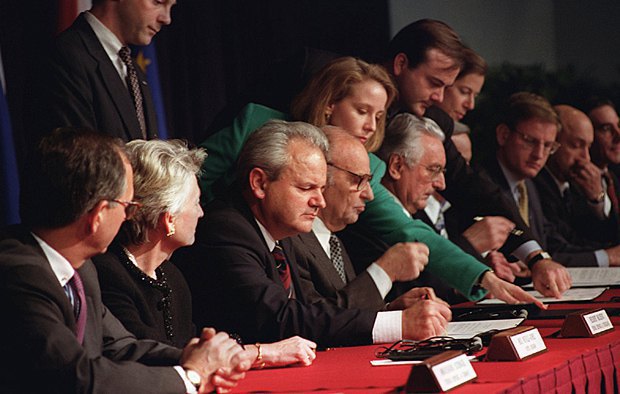 Negotiations on the Dayton Agreement, 1995

Thus the story of the "Serb republic establishment" is a story of separatism and the waging of the war in one's own country with the support of the strong Yugoslav army and directly from Milošević. So it appears that President Dodik awarded Leonid Reshetnikov for the actions described by the CIA report as war crimes.

In fact, there is nothing surprising about this – for decades, the Russian Institute for Strategic Studies was astonishingly loyal to itself: according to its former employees, namely this institute lobbied for the annexation of Crimea and the war in Donbas.

However, the awarding is not a factual proof of the Russian special services' involvement in the bloody events on the territory of former Yugoslavia. This is yet another indicator of continuing close ties between Bosnian Serbs and Moscow analysts. It may be a result of these relations we are witnessing today in Dodik's statements.

The Serb republic is by far not the only Balkan country where Russia has been busy with destabilization activities recently. LB.ua earlier said about Russia's activity in Serbia in which the Kremlin relies on Serb nationalists (many of whom are active participants in the Kremlin's operations in Crimea and Donbas). The biggest scandal involving Serb radicals broke out after the failed coup in Montenegro when its authorities openly blamed Russia for plotting terror attacks and trying to topple the government with the help of militants under their control.

Now, judging by the plans announced by Dodik, the Kremlin's failed attempt to stage a coup in Montenegro last year is obviously not the last one. The president of the Serb republic announced his intention to revise the state borders of at least four countries: Bosnia and Herzegovina, Serbia, Kosovo and Montenegro.

This independence referendum of Bosnian Serbs can theoretically be used to further legitimize the annexation of Crimea, especially if as a result of it a seceded Serb republic joins Serbia.

As if to implement the plan, confrontation between the Serbian authorities and Kosovo Albanians flared up over the Belgrade trade incident. After Kosovo declared independence, there has been no train service between Belgrade and Pristina. However on 14 January, Belgrade sent a passenger train to Kosovo. Carriages painted in the colours of Serbia's national flag had "Kosovo is Serbia" written on them in 21 languages, including the Albanian one. The phrase is clearly provocative in Albanians' opinion. 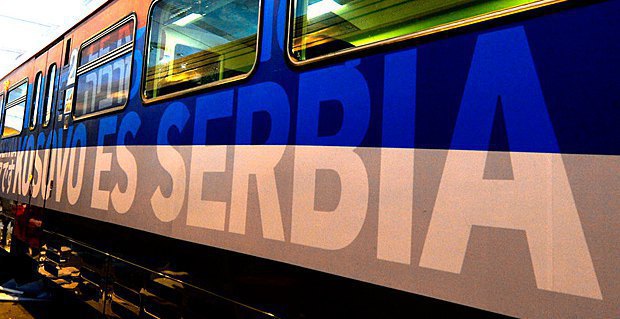 Photo: EPA/UPG
The train saying "Kosovo is Serbia" was stopped at the Raška station

Having learned about the train, the Pristina authorities ordered its law-enforcement agencies to block the passage of the train, including by using arms. When special police units on armoured vehicles moved closer to the border, Serbian President Tomislav Nikolić said the army can be used to protect the Serbs on the train. A clash was avoided when Serbian Prime Minister Aleksandar Vučić ordered the train to stop at the border station of Raška.

Vučić however said some strong words. For example, he said that he was issuing his last warning to Albanians. Tomislav Nikolić, for his part, said that unless a dialogue in Brussels focuses on the freedom of movement in Europe as such, he does not feel obliged to negotiate with the temporary institutions of Pristina and even with the EU.

Serbian military expert Miroslav Lazanski, who joined Serbia's ruling party last year, went even further. Known for his pro-Russian position before, he said in one of his recent interviews that Russians were deploying nuclear arms 150 km from Belgrade. None of Serbian officials commented on his statement. 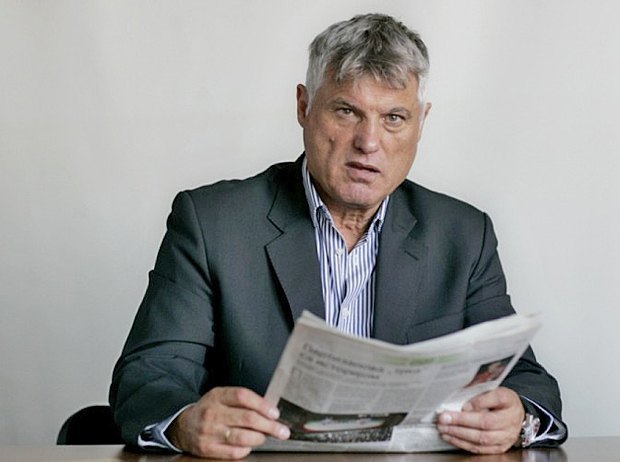 According to Serbian pundit Vencislav Bujić, pro-Russian radicals visibly stepped up their efforts inside Serbia recently, acting as confidently as never before.

"The leaders of the pro-Kremlin organization Zavetnici felt so confident that they threatened me and like-minded people with punitive psychiatry. To be more accurate, they spoke of their inevitable victory and promised us, supporters of the European path of Serbia's development, a "humane" retaliation by placing us in a mental facility. However the use of psychiatry for punitive purposes is not traditional to Serbia. They could only get this idea from Moscow," Bujić said.

According to the Serbian analyst, a suspected participant in the failed coup in Montenegro wanted by Interpol, Nemanja Ristić, who is known for his connections with Russian diplomats, openly said that "Russophile" Serbs were instructed by Moscow to "strike the enemy", which could be Albanians, NATO and the EU. The radicals are absolutely sure of their impunity and brag that Russia will "make an agreement with Trump" and that the new US administration will not be a problem.

Analysts already see that the confrontation between Serbs and Albanians will especially benefit Moscow because it will create an illusion of the Christian-Muslim conflict where Albanians fighting against Serbs can be immediately declared "Islamic State terrorists". This propaganda product can evoke more sympathy with the Russian people than the war in Ukraine or even in Syria.

By the way, Russian media are already preparing an information background for this legend by reporting on radical Islamists with combat experience in Iraq and Syria which have allegedly been flooding Bosnia and Herzegovina. Certain articles in Russian mass media directly predict a war in the Balkans and already blame it on Islamic terrorists (some experts believe there are many such people in Russia). Pro-Kremlin TV channels also predict terrorist acts in the Balkans. 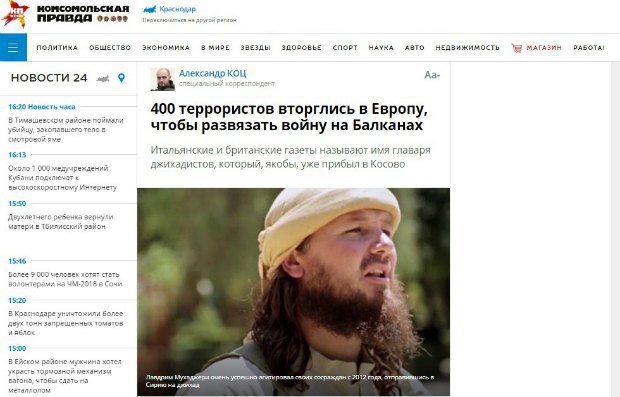 Let me remind you that the Russian propaganda held a similar information campaign against Ukraine in 2013, in particular by creating a fake threat in Crimea ahead of the Vilnius summit. "At the early stages, the Russian press of the second echelon started forming a 'phantom menace' emanated by Crimean Tatars who allegedly were about to join forces with Syria jihadists in terror attacks on the Russian population of Crimea and military facilities of the Black Sea fleet in retaliation for Russia's support for Bashar al-Assad. The main idea was to show that Ukrainian authorities can no longer guarantee security for Russian people in Crimea and therefore Russia should take Crimea under its wing. But it was a backup plan of the Kremlin if Ukraine signs the association agreement with the EU in November 2013," Ukrainian media recall.

One should not forget about another Balkan state of great interest to Russia, which is Macedonia.

According to Vencislav Bujić, Russia's Deputy Prime Minister Dmitriy Rogozin was straightforward at a meeting with the leader of the Serbian Radical Party, Vojislav Šešelj, in early 2016 when he said that the Kremlin's top priorities are Montenegro and Macedonia. Rogozin also presented Šešelj several jewel boxes with the images of Russia-annexed Crimea, adding that he was looking forward to receiving something from the Serb radical leader which would symbolize Kosovo's return to Serbia.

Judging by the public sentiments in Montenegro, Macedonia and Kosovo, all these regions are far from willing to become a part of "Great Serbia" and are quite pro-European. This means Moscow's plans cannot be put to life without a long and bloody war on the entire territory of the Western Balkans.