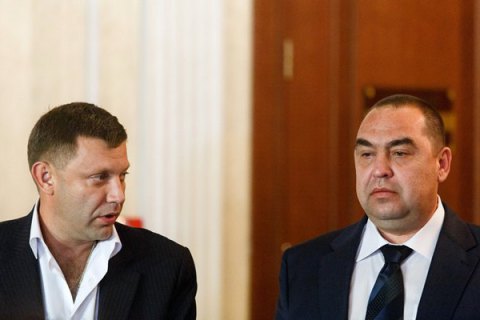 Oleksandr Zakharchenko and Ihor Plotnytskyy, chieftains of the self-proclaimed Donetsk and Luhansk people's republics (DPR and LPR) respectively, have arrived in Russia-annexed Crimea, the Russian news agency RIA Novosti has quoted a deputy chairman of the Russian community of Crimea and Russian Duma MP, Andrey Kozenko, as saying.

The delegation from Donbas was invited by the Russian community of Crimea. Apart from Zakharchenko and Plotnytskyy, the militant delegation includes the so-called chairmen of the people's councils of the DPR and LPR, Denys Pushylin and Volodymyr Dehtyarenko.

By 20 January, they will in particular attend a solemn rally near the Bohdan Khmelnytskyy monument in Simferopol on the occasion of the Pereyaslav Council.

The Pereyaslav Council is a military council convened by Hetman Bohdan Khmelnytskyy in Pereyaslav on 8 (18) January 1654, following which he requested the Moscow tsar's military protection against Poland, which essentially paved the way to the Russification of Ukraine.