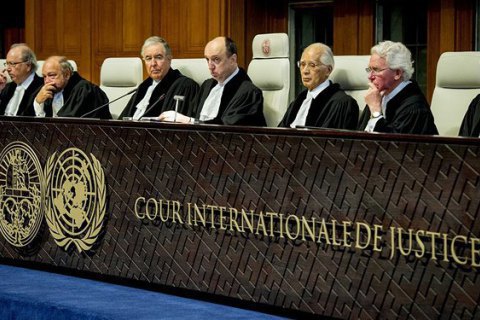 The Ukrainian Foreign Ministry has filed a case with the International Court of Justice to hold the Russian Federation accountable for acts of terrorism and discrimination in the course of its unlawful aggression against Ukraine.

"Ukraine has just filed an action against the RF in the UN International Court. A historic step. The right is on our side," the Foreign Ministry's spokesperson Maryana Betsa has tweeted.

According to the Foreign Ministry, Ukraine insists that the Russian Federation is violating the Terrorism Financing Convention by supplying weapons and other forms of assistance to illegal armed groups operating on Ukrainian territory. These groups have committed acts of terrorism in Ukraine with weapons supplied by Russia, including the downing of Malaysian Airlines Flight MH17.

Other acts of terrorism include the bombardment of residential areas in Mariupol and Kramatorsk, the destruction of a civilian passenger bus near Volnovakha, and the deadly bombing of a peaceful gathering in Kharkiv.

In addition, Ukraine alleges that the Russian Federation is violating the Convention on the Elimination of All Forms of Racial Discrimination by engaging in a campaign of discrimination against non-Russian communities living in the occupied Crimean Peninsula, including, in particular, the ethnic Ukrainian and Tatar communities.