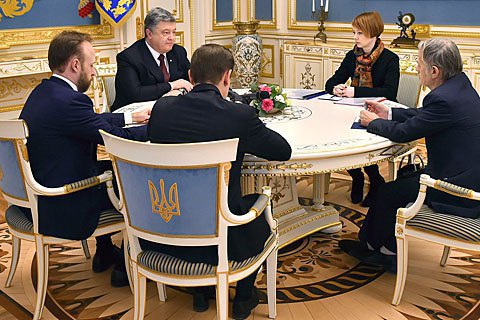 Ukrainian President Petro Poroshenko has instructed the Foreign Ministry to submit a dispute to the UN International Court of Justice in The Hague regarding Russia's violation of the UN Convention for the Suppression of the Financing of Terrorism and the Convention on the Elimination of All Forms of Racial Discrimination.

"The Russian Federation has been brutally violating international law for three years. For three years, Russia has been committing the illegal annexation of Crimea, illegal occupation of the east of our country on the territory of Donetsk and Luhansk regions, implementing the policy of elimination and discrimination in Crimea […] Those who stayed in Crimea and Donbas are subjected to torture and persecution. The Majlis of the Crimean Tatar people was banned and other crimes are being committed which cannot stay unpunished," he said.

In particular, the lawsuit concerns the shelling of Mariupol in January 2015, a shooting attack on a bus at a roadblock near Volnovakha, the shelling of Kramatorsk in February 2015, and the Malaysia Airlines Flight 17 (MH17) shot down by pro-Russian militants in July 2015.