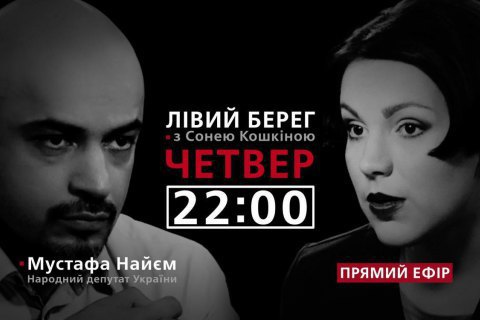 Attempts to define a legal status of Ukraine's occupied territories have recently topped the Ukrainian political agenda. Deputy parliament speaker Oksana Syroyid has recently announced that her Self-Help (Self-Reliance) party has submitted a bill on the matter. Another initiative was recently expressed by MP Mustafa Nayem of the propresidential Petro Poroshenko Bloc (PPB).

What does the younger generation of Ukrainian politicians have to say about Donbas, an exchange of prisoners , the "Savchenko factor", the information security doctrine and the situation in the PPB. Who is to head the faction if Ihor Hryniv quits politics?

Mustafa Nayem will discuss these and other issues on Sonya Koshkina's Left Bank talk show tonight.

After the show, do not miss the traditional Postscript with Sonya Koshkina.