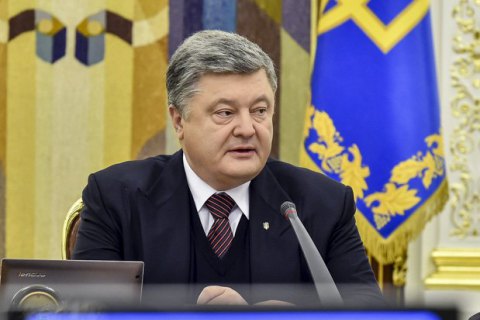 President Petro Poroshenko has criticized the decision of a parliamentary committee to exclude the so-called antidiscrimination norms from the draft Labour Code and assured European partners that this initiative would not find his support, his spokesman Svyatoslav Tseholko said on Facebook on 27 March.

"The president will not allow the revision of Ukraine's obligations, which we have implemented within the visa-liberalisation effort. The decision of the parliamentary committee to exclude the so-called antidiscrimination norms from the draft Labour Code is wrong and even provocative," Tseholko said.

The president assured Ukraine's European partners that this position of the committee would find no support either in parliament or in his administration.

"Ukraine has fulfilled, fulfils and will fulfill all of its obligations," Tseholko stressed.

In November 2015, parliament adopted a bill that prohibits labour discrimination on the basis of sexual orientation and gender identity.

The amendment, passed amid heated debates in parliament, says that any employment discrimination, in particular the direct or indirect restriction of workers' rights, depending on race, gender, political, religious and other beliefs, gender identity, sexual orientation, age, state of health, suspicion or presence of HIV/AIDS, family and property status, place of residence, participation in a strike, appeal or intention to apply to the court or other bodies for the protection of their rights, on language or other grounds, not related to the nature of the work or the conditions for its implementation.

The adoption of an antidiscrimination amendment was a part of the country's commitment to the EU under the process of visa liberalisation between Ukraine and the EU.

The EU has recognised that Ukraine has successfully fulfilled all 144 obligations within the framework of visa dialogue.

The visa-waiver vote in the European Parliament is scheduled to be held on 6 April.