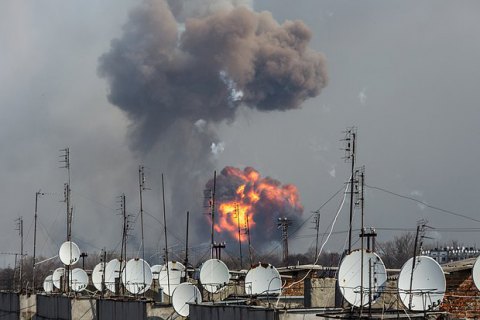 As of 24 March at 8:00 Kyiv time, the intensity of blasts at military depots in Balakliya has decreased significantly, the Ministry of Defense said in a release.

In the morning on Friday, an aerial reconnaissance of the area was conducted to identify hotbeds of fire.

The engineer-sapper divisions of the Armed Forces of Ukraine have arrived at the scene of the accident and began demining the territory adjacent to the ammo warehouses, and are ready to start clearing the territory of the depot.

"The intensity of the explosions has significantly decreased. While at 04:00 the explosions had the frequency of one to two minutes, now they have decreased to one in 15 minutes. That is, the situation is changing for the better. After the army fire brigades managed to localise the fire, the territory is inspected around the perimeter to determine the scale of the fire and decide on further course of actions," he said.

In the small hours of 23 March in the city of Balakliya, Kharkiv Region, a fire broke out in the territory of Ukraine's largest military depot. The fire caused the detonation of 125-mm tank shells and 152-mm artillery shells. According to the military prosecutor's office, it was an act of sabotage, in the course of which incendiary devices were dropped from an enemy drone.

The depo accommodated 125,000 tonnes of ammunition in numerous warehouses on the territory of 368 ha. Firefighting effort is constrained by ongoing ammo explosions.