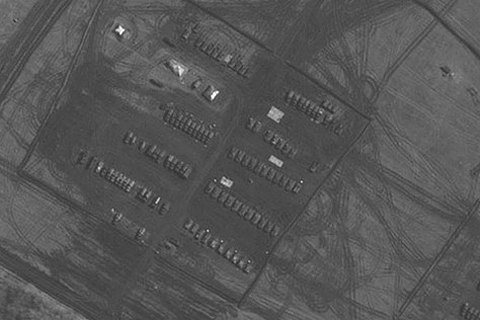 Satellite image of Russian troops at the borders with Ukraine
Photo: Archive photo.

The European Union decided to allocate 3 million euros for the transfer of satellite images of the ATO zone for the special monitoring mission (CMM) of the OSCE in Ukraine.

"The European Commission on behalf of the European Union has added its strong support for the special OSCE monitoring mission (OSCE SMM) in Ukraine, whose mandate was recently extended to the full implementation" of the Minsk agreements. "With the new financing in the amount of 3 million euros timely and substantive support will be provided OSCE in the field of satellite visual reconnaissance," the EU Delegation in Ukraine reported on 24 March.

The EU High Representative Federica Mogherini said the use of satellite imagery will allow for more in-depth monitoring of the situation on sites to which observers still do not have access. They will also contribute to a more effective deployment of observers in general.

Satellite visual reconnaissance is an important analytical and planning mechanism. It will enable the mission to identify broad areas to which observers do not have access, and to receive information about infrastructure damage and the presence or movement of manpower and equipment.

The current funding will be distributed through the European Union's Satellite Center.

The center will search for the necessary images and, at the request of the OSCE, provide the mission with the results of the analyses.

In June 2015, the European Union decided to allocate the OSCE CMM in Ukraine 18 million euros in addition to previously provided 7 million euros. The money was spent including on satellite imagery in the ATO area.