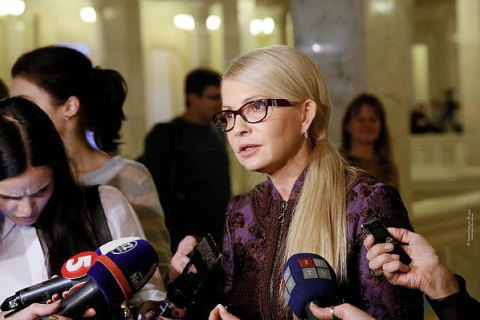 The Fatherland party together with the Association of Farmers has started collecting signatures against the sale of agricultural land, the party's leader Yuliya Tymoshenko said on TV channel ZIK on 11 May.

"The main strategic issue today is whether this government is to be allowed to auction off Ukrainian agricultural land," she said.

"The decision to sell agricultural land has already been taken by the president, Groysman's government and their pocket majority in parliament, the relevant draft law has been submitted to parliament for review," Tymoshenko said.

"The agrarian mafia - the Poroshenko family and a dozen of other clans are trying to legitimize what they have already laid their hands on," the politician noted.

She stressed that Ukrainian villagers are paid up to 1 thousand dollars rent per one hectare of their land while the real cost of Ukrainian black soil is at about 70,000 euros per hectare: "You are being robbed blind!"

Tymoshenko is convinced that the agricultural land should be owned by the state, and "the villagers should be allowed to sell the plots only to the state and only at market prices."

"The overall cost of Ukrainian agricultural land is 3.5 trillion euros. This is Ukraine's GDP for 40 years. If they take it for a pittance, we will be left with nothing," the leader of the Fatherland said.

Tymoshenko believes that the future of Ukraine is with farms that are being destroyed and not allowed to develop.

"Our task is to create 2.5 million farms, and, like in other agrarian countries, provide them with benefits and inexpensive 3-per-cent loans," the politician said.

Tymoshenko reminded that the president "with the help of a pocket court" has blocked Fatherland's idea to hold a nationwide referendum on the prohibition of the sale of agricultural land.

"Unless Poroshenko, Groysman and all their mafia heed our demand not to sell agricultural land in favour of long-term rent solely to farmers, we will take the people to the streets!" Tymoshenko concluded.