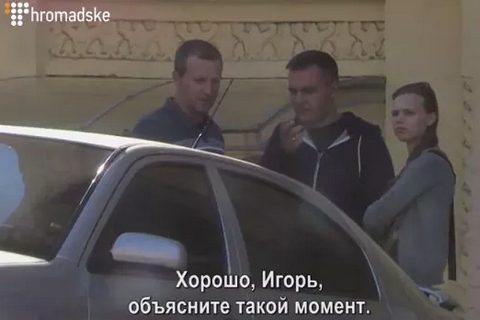 Head of the Security Service of Ukraine (SBU) Vasyl Hrytsak says Ihor Ustymenko, whom investigative journalists suspect of being involved in the murder of journalist Pavel Sheremet, has nothing to do with the SBU since 2014. Hrytsak said Ustymenko, who known to be an SBU officer, was dismissed for health reasons.

"He had nothing to do with the service since 2014. […] Neither he did work in the interests of the SBU," Hrytsak told a press conference in Kyiv on Monday, 15 May.

Pavel Sheremet was killed on the morning of 20 July, 2016 in a car explosion in the center of Kyiv. The car belonged to the chief of the Internet publication Ukrainska Pravda Olena Prytula, who was not in the car. The police qualified the explosion as a deliberate murder. Almost immediately after the murder, a video of the alleged bomb planting under the bottom of Sheremet's car was posted to the net.

In early May, OCCRP journalists and the investigative portal Slidstvo.Info posted video footage that indicates that Ihor Ustymenko, an SBU officer until 2014, was present near the house of Sheremet a few hours at night, when a bomb was planted in the journalist's car.

Ustymenko declined to comment on his SBU past, and failed to explain in an interview what he was doing near Sheremet's house on the night before the murder.

On 14 May, President Petro Poroshenko said the National Police had summoned Ustymenko for questioning.