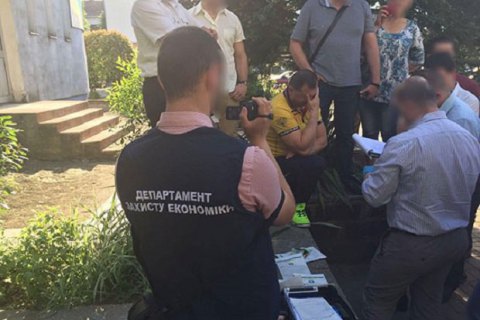 In the Transcarpathian region, law enforcement officers on 29 May detained the participants of a graft scheme that included a city mayor, councilmen and city hall officials.

The perpetrators have been caught red-handed as they received 4,000 dollars in bribes, regional police department said on 30 May.

The members of the group demanded cash from an entrepreneur, who sought to rent a land plot and permits for the placement of a small architectural form (kiosk).

The anti-graft operation was a joint effort by regional officers of police, security service and prosecutor's office.

The police opened criminal proceedings on corruption charges punishable by 5 to 10 years in prison.

The Prosecutor General's Office reported in a release on 30 May about the detention of Chop officials.

The mayor of the city, Valeriy Samardak (Petro Poroshenko Bloc) was arrested on a train as he headed outside the region.

Samardak was accompanied by the councilman Vitaliy Rusyn and Chop's chief architect Denys Gansel, who were also detained.

The total amount of the bribe in this case was 7,500 dollars.

Previously, a dean of the Uman University was caught on graft.