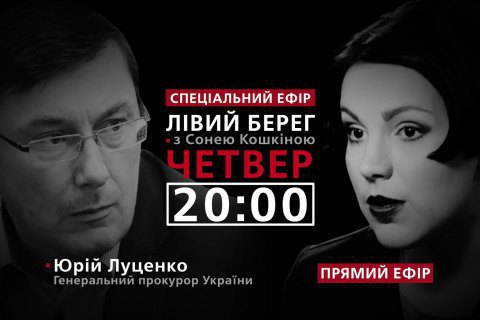 The beginning of the trial of former President Viktor Yanukovych, the transfer of the Olesya Buzyna case to court, the prosecution of deputies for tax evasion, the requirement to strip a number of people's deputies from immunity, a large-scale operation to detain former tax officials. This is an incomplete list of what Prosecutor-General Yuriy Lutsenko can consider his achievements. His recent report in the Verkhovna Rada turned out to be very capacious, and his one year in the office was appraised by President Petro Poroshenko.

Does Lutsenko feel happy about the fulfilment of his tasks? When should we expect a progress in the complicated cases like the murder of Sheremet or the case against former officials of the times of Yanukovych?

About these and other things Sonya Koshkina will ask Lutsenko on her talk show Left Bank on 1 June at 20:00 Kyiv time on TV Channel 24.