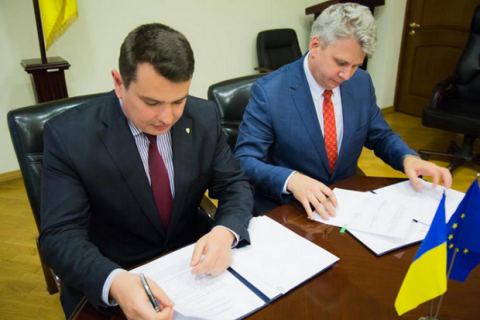 The National Anti-Corruption Bureau of Ukraine has agreed on cooperation with the Estonian Center for Eastern Partnership (ECEAP).

"The NABU will exchange information and experience in the field of detection and investigation of corruption offenses with the Estonian Center for Eastern Partnership (ECEAP). The director of the NABU, Artem Sytnyk, and the director of the ECEP, Jan Reinhold, sign the corresponding memorandum of cooperation in Kyiv on June 6," the report said.

The Memorandum stipulates that the parties will organize workshops, joint conferences and seminars to improve the skills of employees, as well as inform each other on issues related to the fight against corruption.

Through training courses, seminars, conferences, debates and publications, ECEAP aims to develop relations with the Eastern Partnership countries – Armenia, Azerbaijan, Belarus, Georgia, the Republic of Moldova and Ukraine as well as contribute towards achieving EU’s Eastern Partnership policy goals. The center’s bilateral cooperation with Eastern Partners is underpinned by multilateral activities that are mainly carried out in the field of public administration reform (PAR).

ECEAP was founded in January 2011 by the Estonian School of Diplomacy and Estonian Ministry of Foreign Affairs. ECEAP is financed by the Estonian Foreign Ministry’s Development Cooperation’s Fund and supported by the Swedish International Development Agency (SIDA), Ministry of Foreign Affairs of Finland and the European Commission. Since December 2015, ECEAP is an independent foundation.

Last May, NABU and the Polish Anti-Corruption Bureau agreed on cooperation. The NABU is also establishing cooperation with the FBI.